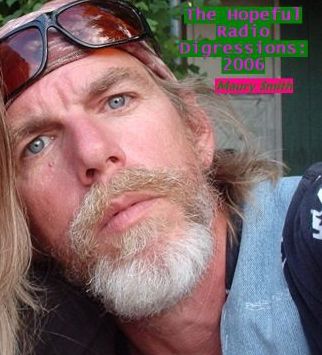 Ten years ago I began looking for a new musical performance format that would accommodate my desire to share both my new songs and my current insights into the state of my personal universe.  Thus was born the Musical Monologue.  My first, entitled Linear Analgesics: Tales from the MIddle Third was written in winter 2003-04 and debuted on Groundhog’s Day, 2004, at Cuppa Jo on Monona Drive in Madison.  Many folks came out and everyone seemed to enjoy the show.  Based on the catharsis engendered by writing the script and the good feeling I got polishing and sharing the new tunes I’d written, I realized  this was something I should probably try to do again.

So I did.  In winter/spring 2004-05 I wrote another–Little Antibody and the Big Disease–which I played out in March 2005 at Cuppa Jo.  Again, the response to the show and the way it made me feel to write and arrange it, prompted me to do it yet again, and it seems to me the third time was the charm.

New Year’s Day in 2006 found me at Steep and Brew on State Street organizing thoughts and preparing to commence the new Musical Monologue. What I began that day and polished over the next 4 weeks became The Hopeful Radio Digressions, which I consider to have been the best of the monologues.  I played it out on Groundhog’s Day 2006 at Cuppa Jo, and again in May (at Arbor Co-housing) and September (at Cafe Zoma) in Madison. I even took this one on the road, performing at The Starry NIght in Fort Collins in June.  That was a thrilling night..

I went on to produce three more musical monologues over the years–My Master’s Thesis in October, 2006, Goodbye Darkness in January 2009 and Banjo: Seriously in November 2010.  All of them were great…at least each had its moments…but nothing ever seemed to touch the Hopeful Radio Digressions.  I’ve got a recording of Goodbye, Darkness and I’m sure I’ll post it sometime soon.  I’d like to record some of the original songs from the others to post as well–eventually I’ll get to that.  This one, however, seems to have sort of stood the test ofd time to me.  I mean, so much is so topical that it no longer applies, but something still comes through about how it felt to live through those horrid times which, somehow, have become still more horrible in so many ways that shit now seems like the good old days.

A great deal of the original musical monologue is not posted below–all the covers I did were left off.  But I think I’ll go back soon and try to find the other tunes and interlocutions and get them up here too.  Meantime, I sure hope you enjoy this stuff if you decide to give it a listen…